Lake closure due to excess algae in Feb 2017 has raised concerns over the effectiveness of the drainage pits and reed beds. The Care Group are looking into possible solutions and Phoslock has success in treating Algae problems in similar lakes in Australia.

Phoslock is an environmentally-friendly tool in algae management. It was developed in Australia by the Commonwealth Scientific and Industrial Research Organisation (CSIRO).

Phoslock is a natural product which starves algae of phosphate, thereby preventing its growth. Unlike many other treatments for blue-green algae, no chemicals are used.

It works by locking away the phosphate present in the water body, permanently preventing its re-release for use by algae. 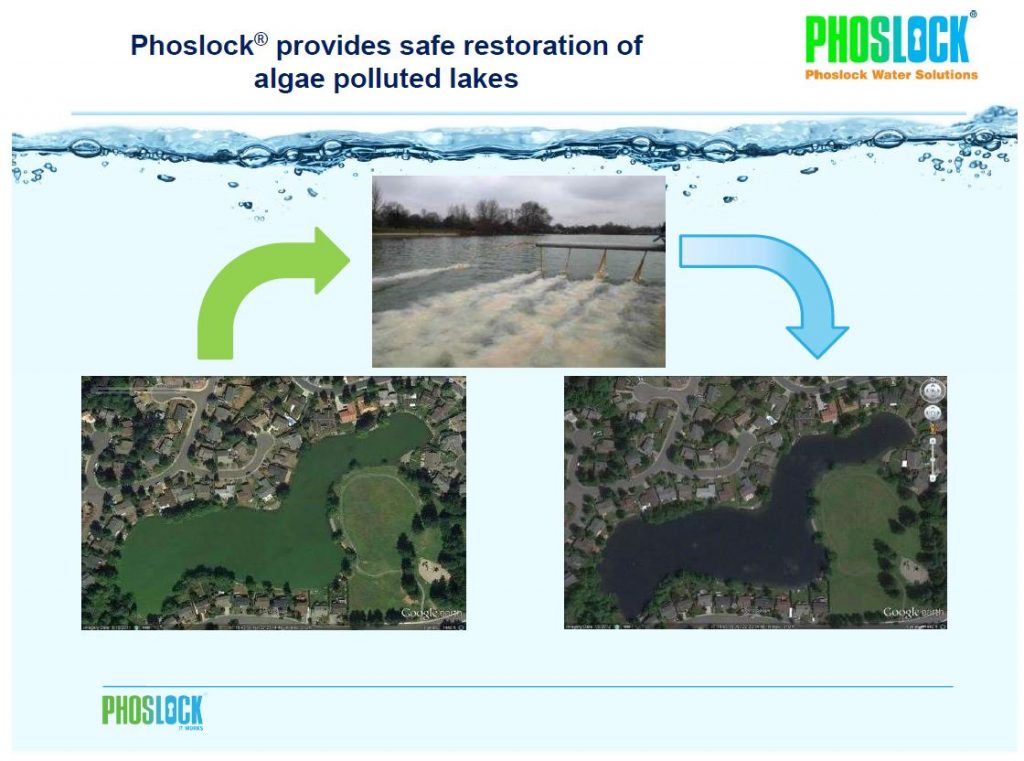 Visit the site below for more info!

The drain located at the back of Bel Air park feeds stormwater straight into the lake and has been a problem for many years. With trees shading the drain area, a lack of sunlight resulted in poor growing conditions leaving large areas of bare soil. 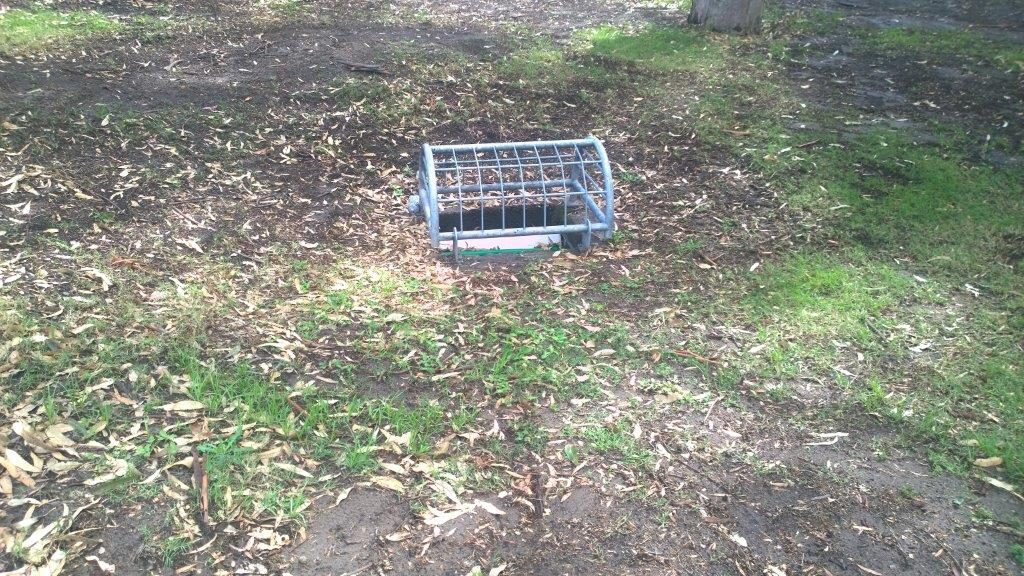 During heavy rain, large amounts of soil flow into the drain and into the lake. Soil adds phosphorus and other nutrients that are already at a high level. 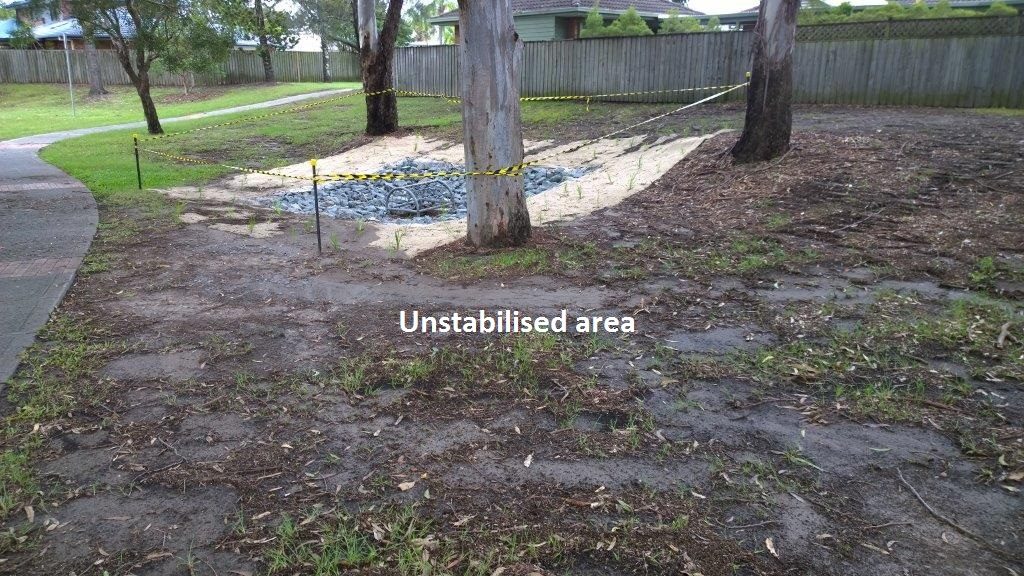 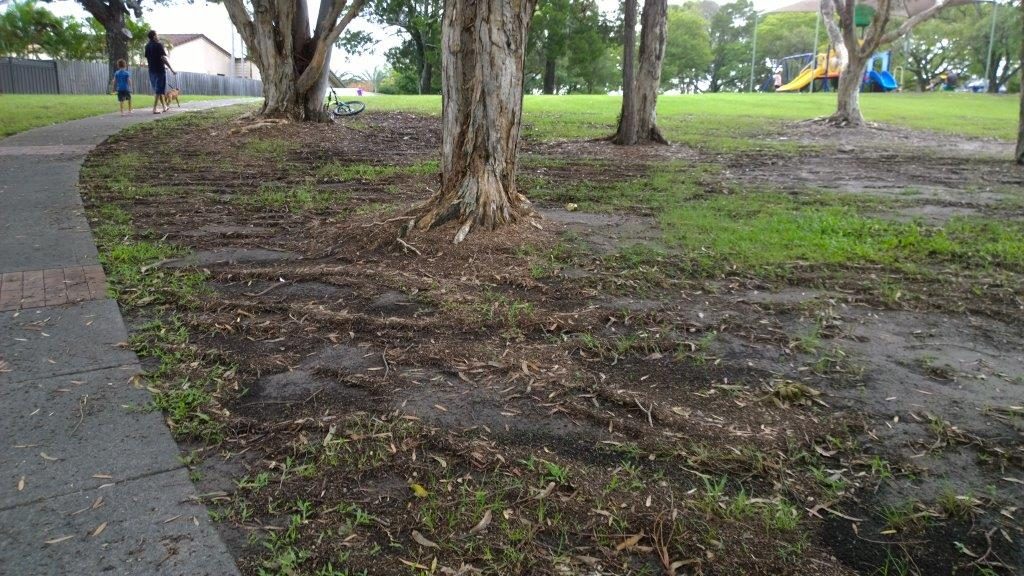 Gold Coast Council have extensively planted the area and installed matting in problem areas. The final plantings, once established will be a great asset for the park and offer long term improvements to the water quality of Lake Hugh Muntz by reducing soil runoff into the lake. A big thank you to Parks and Recreation for a job well done! 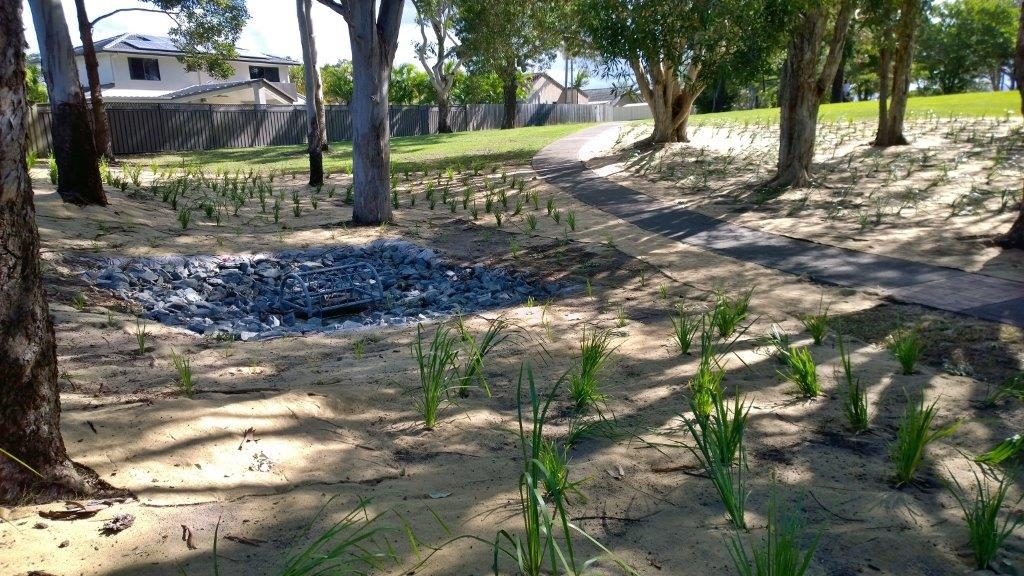 As the lake is a closed system, what flows into the lake stays in the lake! Although the catchment are is small, 65 drains regularly feed leaf litter straight into the lake. Modelling suggests approximately 91,000 KG of suspended solids are produced in the catchment EACH YEAR. 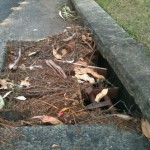 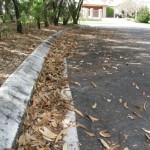 One of the key recommendations of the Management Report was to fit Gully Baskets to all street drains within the catchment. These have the ability to filter waste down to 2mm and offer major reductions as seen below.

Gully baskets were installed in April 2014 in all drains. Two different types are required due to the reduced depth of some drains. Most baskets are of the type below. They contain a centre basket and 2 overflow flaps. 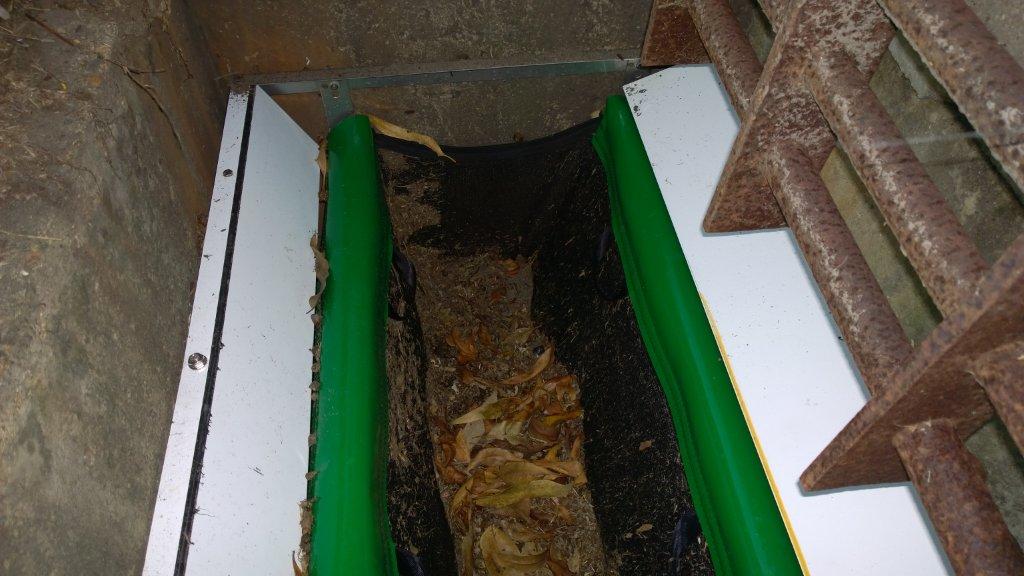 The overflow flaps open up in heavy rain or if the collection baskets becomes full. Leaf litter under these circumstances will flow unfiltered into the lake. This is the limitation of the current design and reduces the chance of the drain becoming blocked causing flooding.

Unfortunately large amounts of leaf litter still end up in the lake!

It is important that the collection baskets are regularly cleaned. If  water flow through the basket is reduced, premature opening of the overflow flap during rain can occur reducing effectiveness.

The current cleaning schedule is once per month and after major rainfall events. Cleaning is done by contractors using a vacuum.

Update! In 2017 Council indicated no measurable improvement in nutrient levels with the trial being a failure. Reed beds may be relocated in the future. 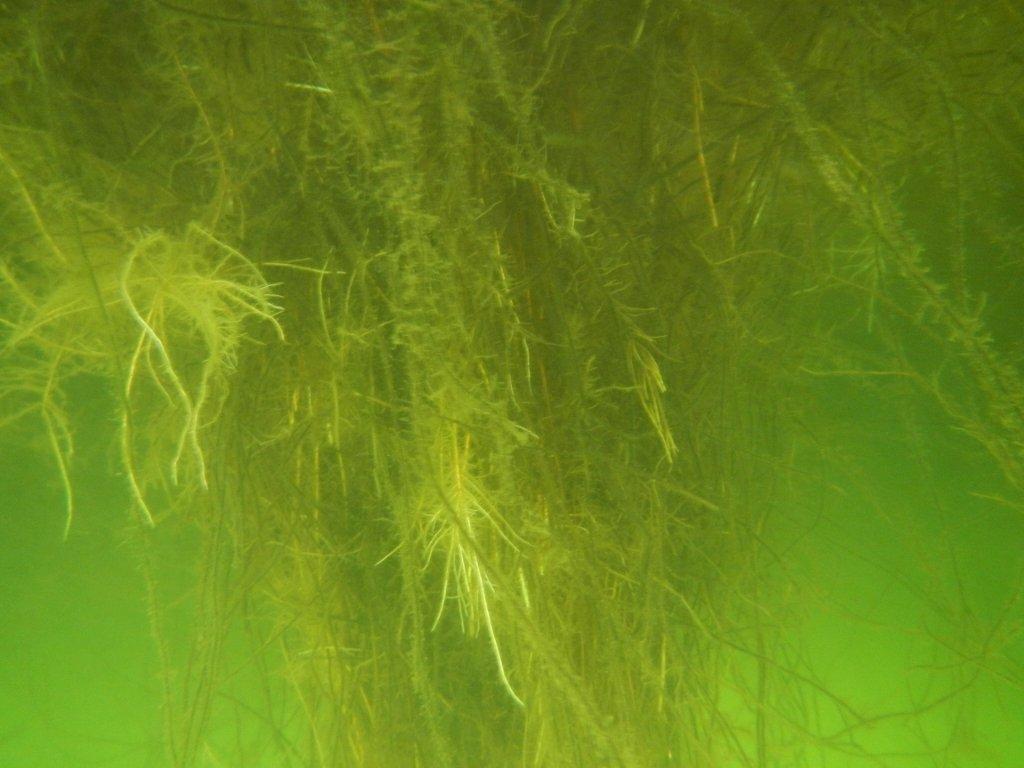 Rising nutrient levels have been a concern in the lake and if left to continue the upward trend will result in increased outbreaks of blue green algae. (see water TAB for more info)  THE FRB’S REMOVE WATER BOUND NUTRIENTS THAT HAVE FLOWED INTO THE LAKE FROM SURROUNDING PROPERTIES, PARKS AND DRAINS AND ARE THE ONLY SOLUTION. Gully baskets work to remove the solids from the drains but nutrients largely pass through them. They have no effect on nutrients that flow from properties or parks around the lake either. 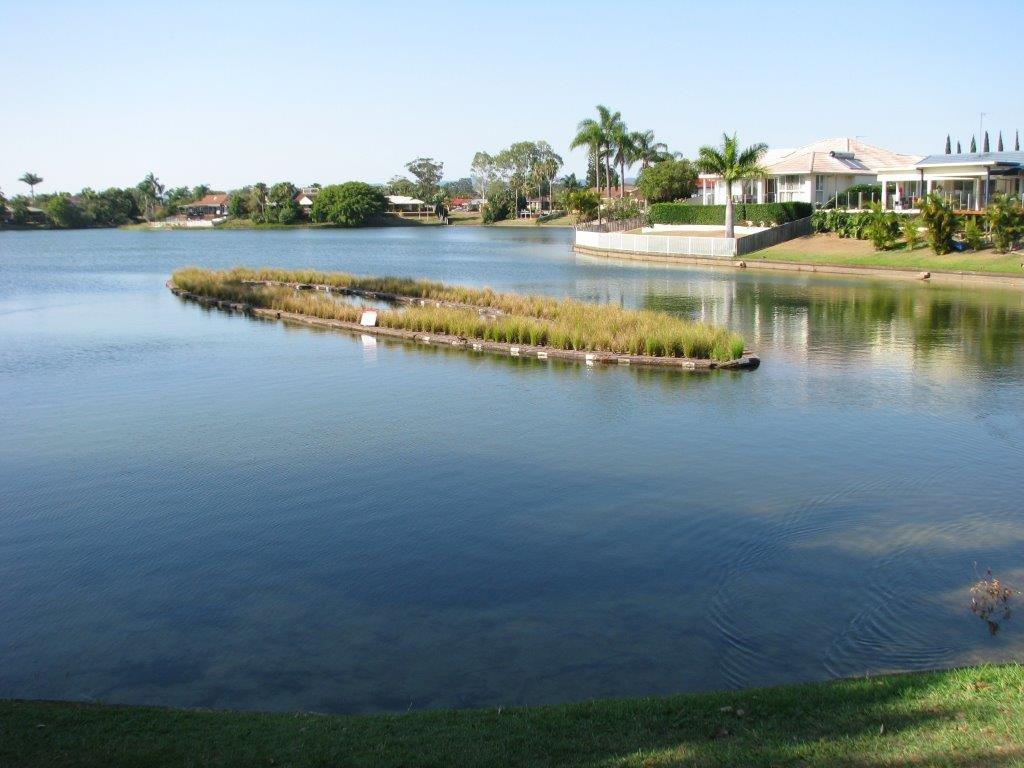 The initial 12 month trial revealed no concrete evidence of water quality improvement. Due to the large seasonal variation in previous water quality tests, it is expected that ongoing water tests over a longer period will provide a clearer picture of the reed beds effectiveness.

Concern has been raised by residents over the poor plant growth and appearance of the Reed Beds. The poor health of the plants is something of a mystery as they have been used very successfully elsewhere, including the Robina Lakes. 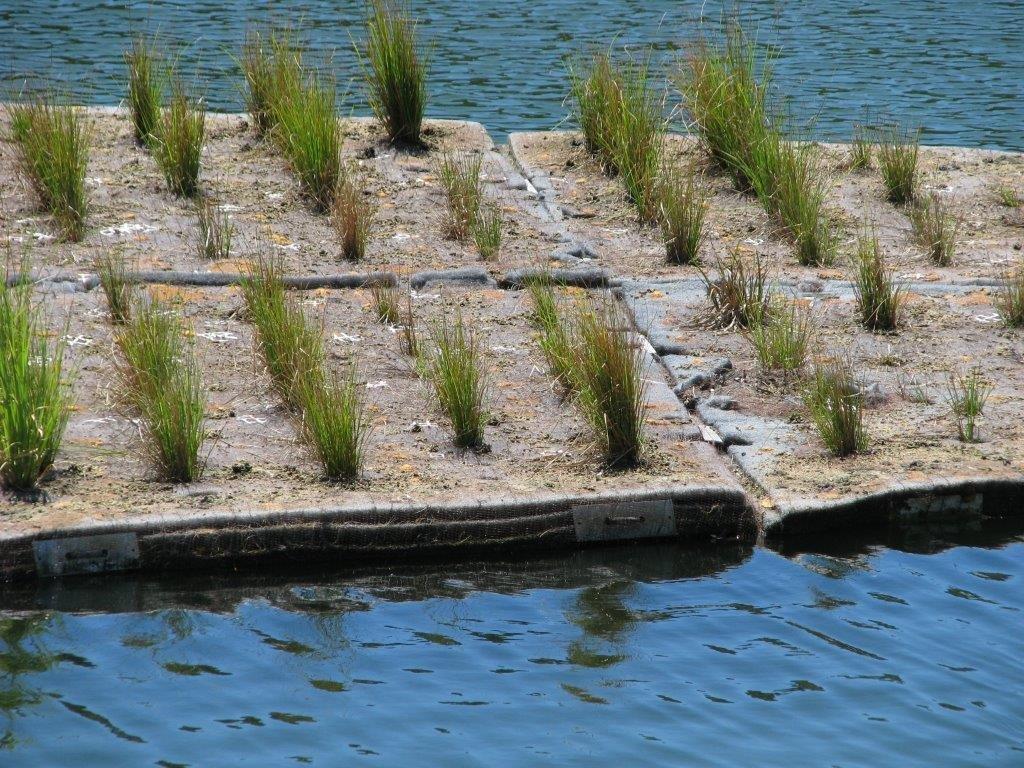 Reed Bed plants were replaced in July 2014 with a variety of species that will perform better. Plants will take some time to establish but over time will hopefully offer a better result. 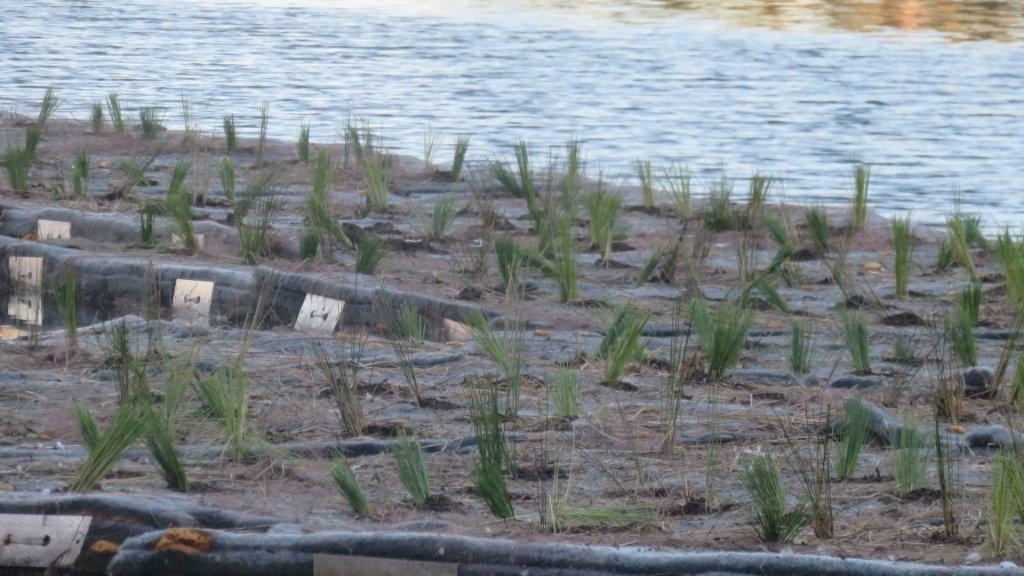 The lake was closed to swimming in the past with high bacteria levels possibly the result of dog droppings not being picked up then washed into the lake after heavy rains. 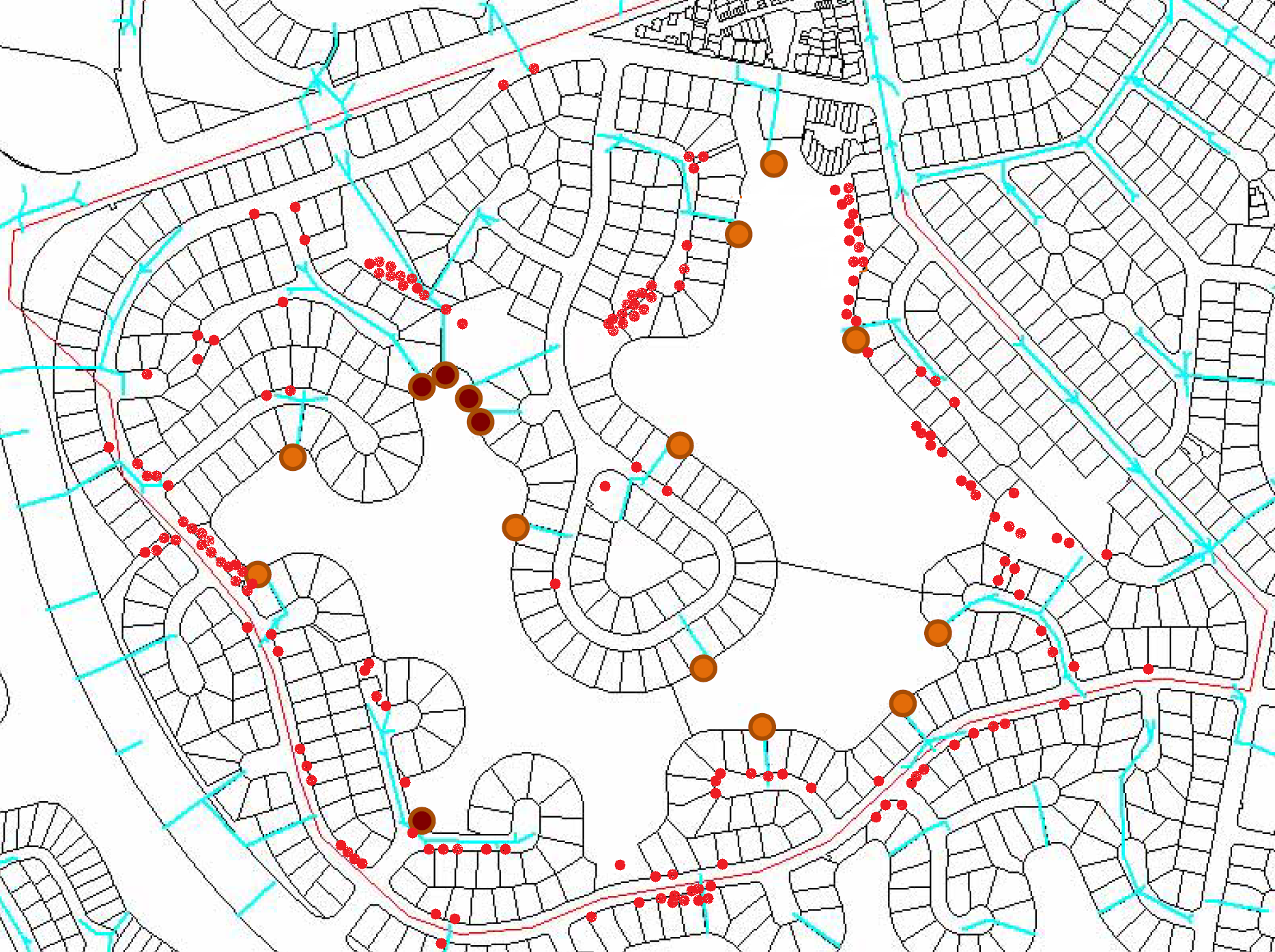 Also rubbish bins are scarce and capacity lacking in some areas. To encourage lake users to “do the right thing” an extra bin/trial community doggy bag holder has been installed in Lamington park and a doggy bag holder installed in Warringah park. Council has also updated many signs in parks.

The  trial community doggy bag holder relies on residents recycling their excess shopping bags by pushing then into the slot. The bag holder originally installed by the care group is pictured below; 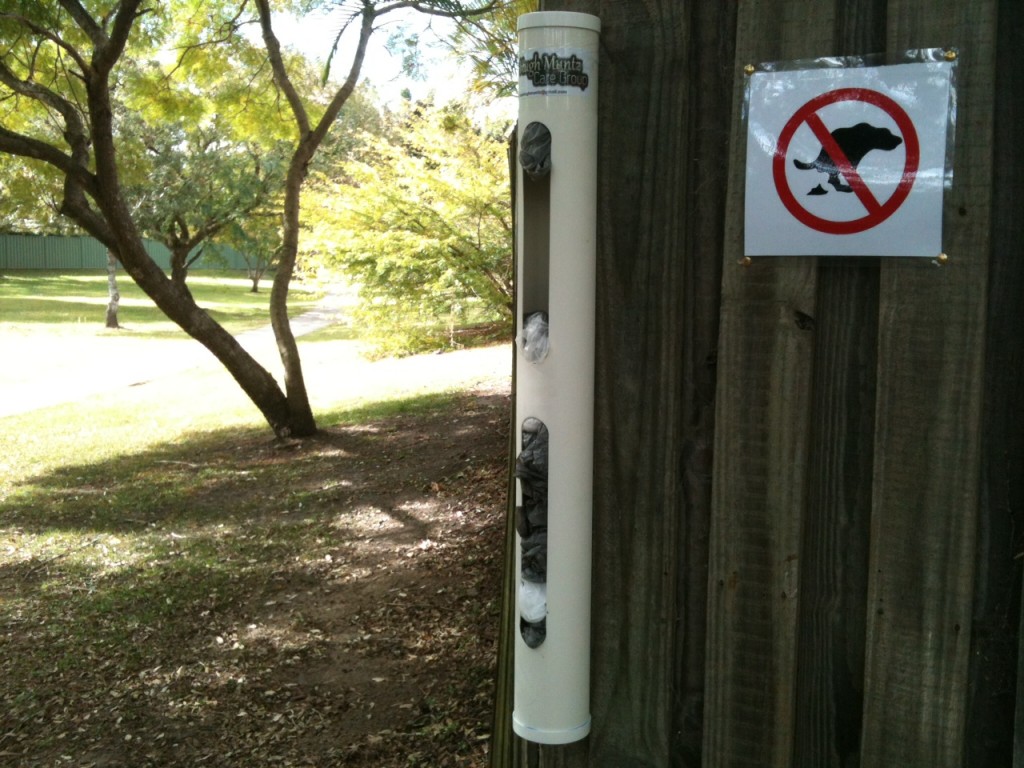 Drains located in parks are now fitted with gully baskets to filter waste. 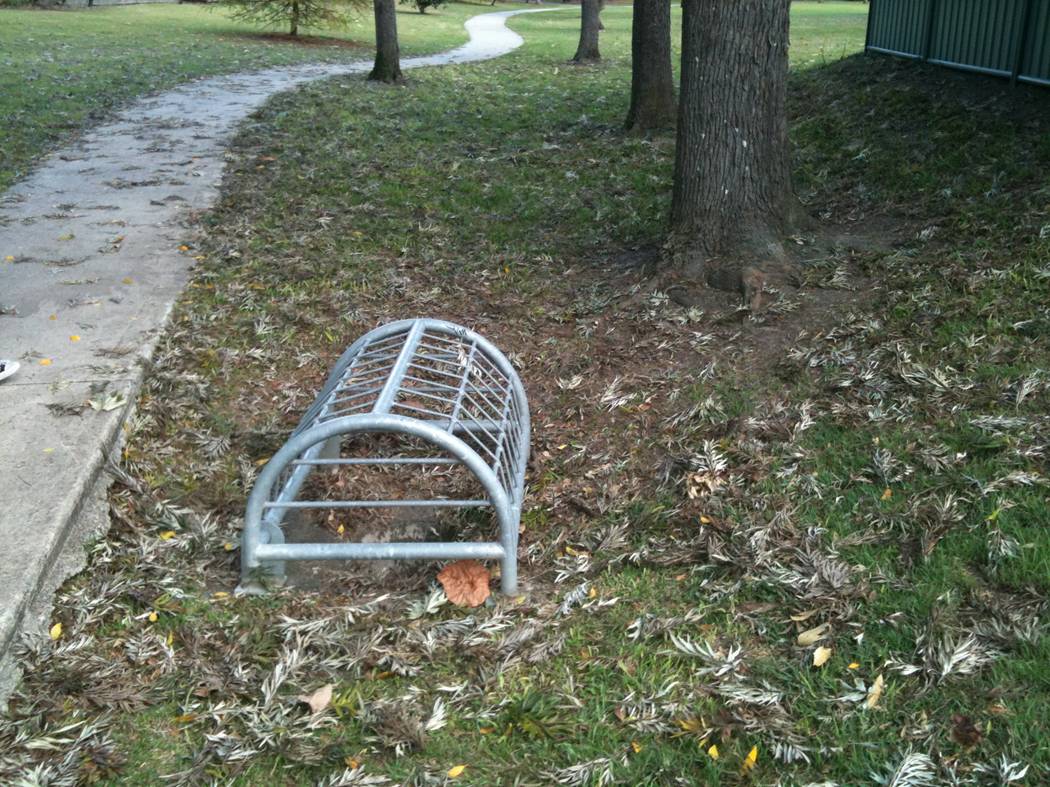 As the baskets do not filter ALL waste, consideration should be given to the installation of a garden area with suitable plants around these drains. These would act as an additional filter for leaf matter.

In parklands within the catchment several areas are devoid of vegetation. This is to be due to poor growing conditions under trees . 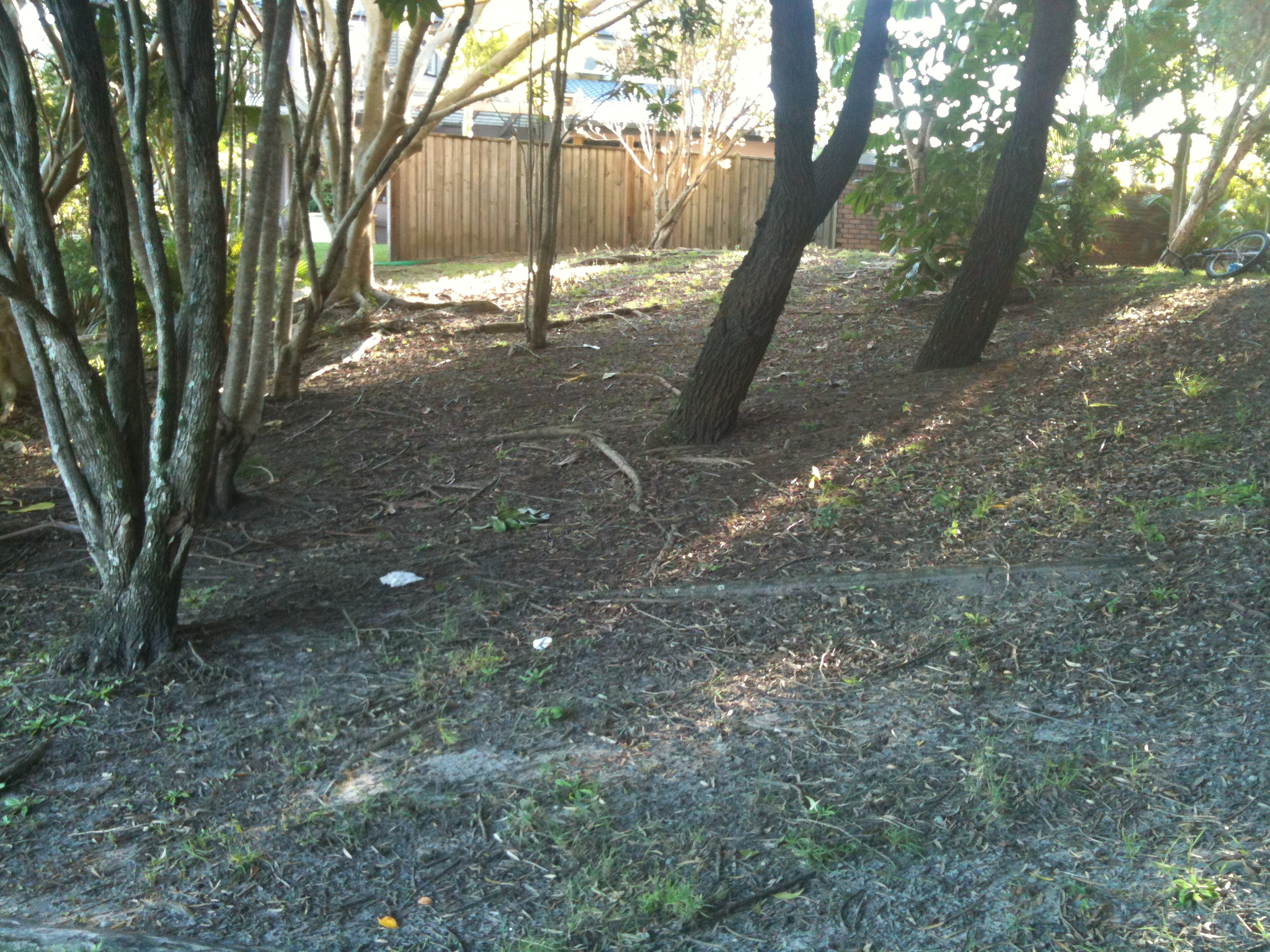 The area adjacent to the preschool (above) has been replanted and mulched by council to reduce runnoff. The results below show a great improvement. 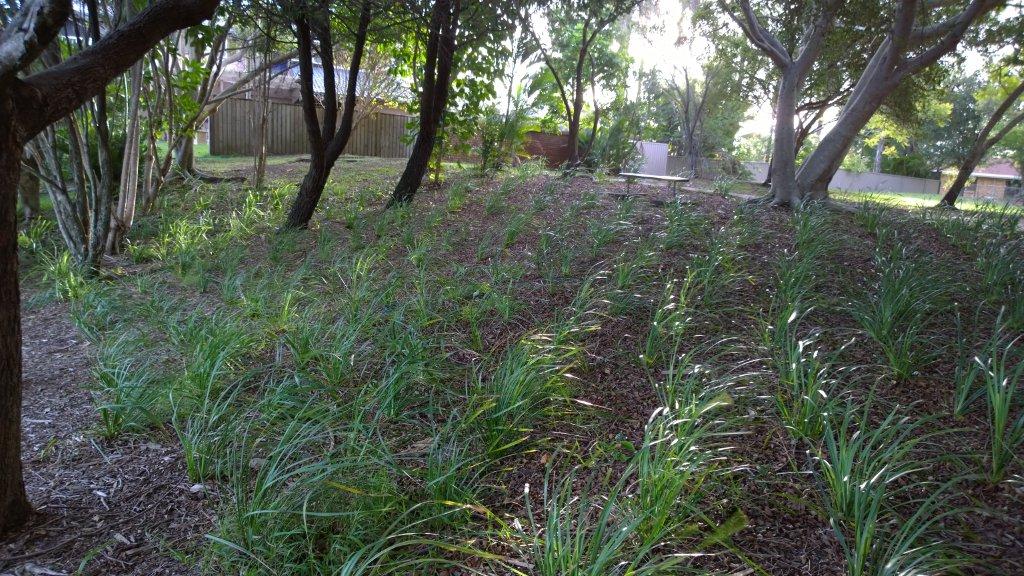 A nature strip runs along the lake wall from Bell Air Park to the northern part of the lake. When this is mowed by contractors, a large amount of lawn clippings end up in the lake. The current nature strip is overflowing the lake retaining wall making it difficult to cut due to the increased slope. 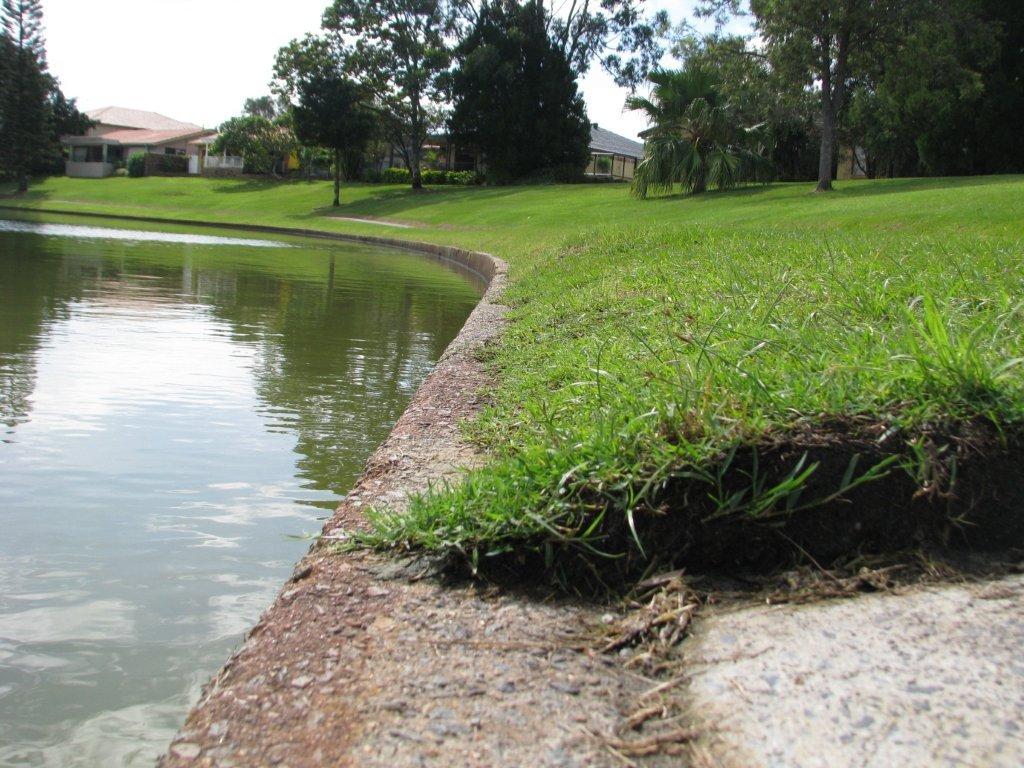 A suggestion to resolve this problem is removal of the grass and installing plants/mulch to capture not only clippings from the nature strip but also filter clippings from the large grassed areas above the path as well. Council have raised concern over mulch being washed into lake and safety concerns over plants blocking views of swimmers. An alternative may be strip gardens further up the slope on the other side of the footpath.

Palm trees located close to the waters edge were depositing old palm fronds and numerous seeds into the lake. This has been removed by council. The area under the trees is also devoid of vegetation and requires stabilisation. 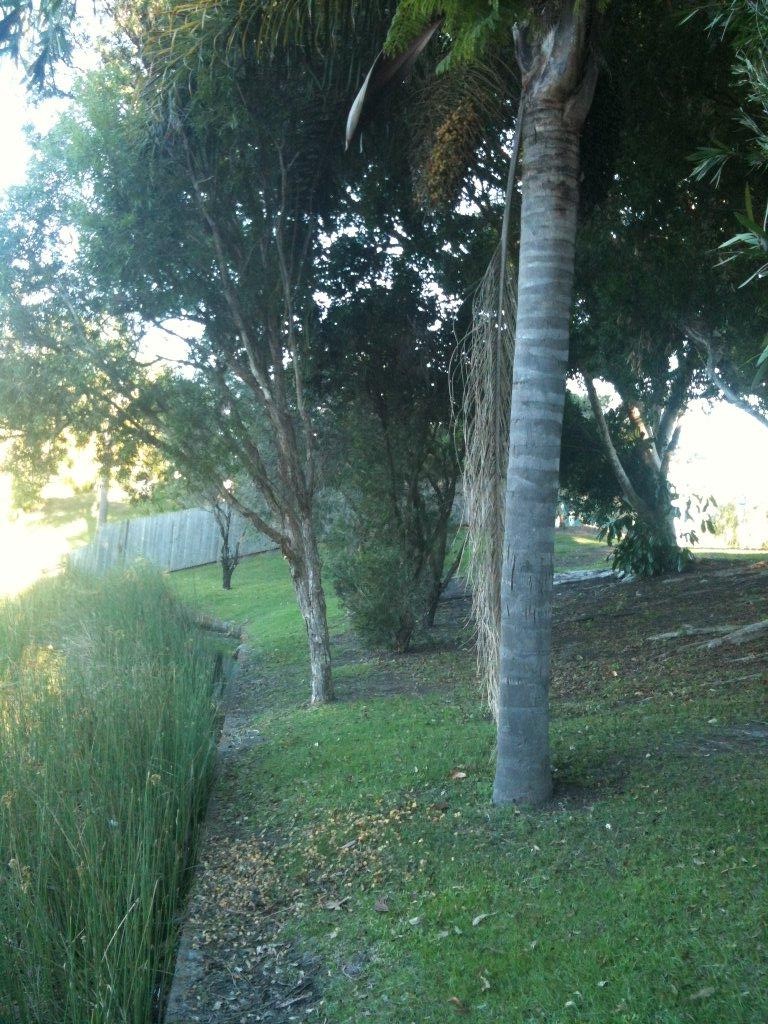 Singapore Daisy was migrating over the grass area and extending over the water and covering reeds. 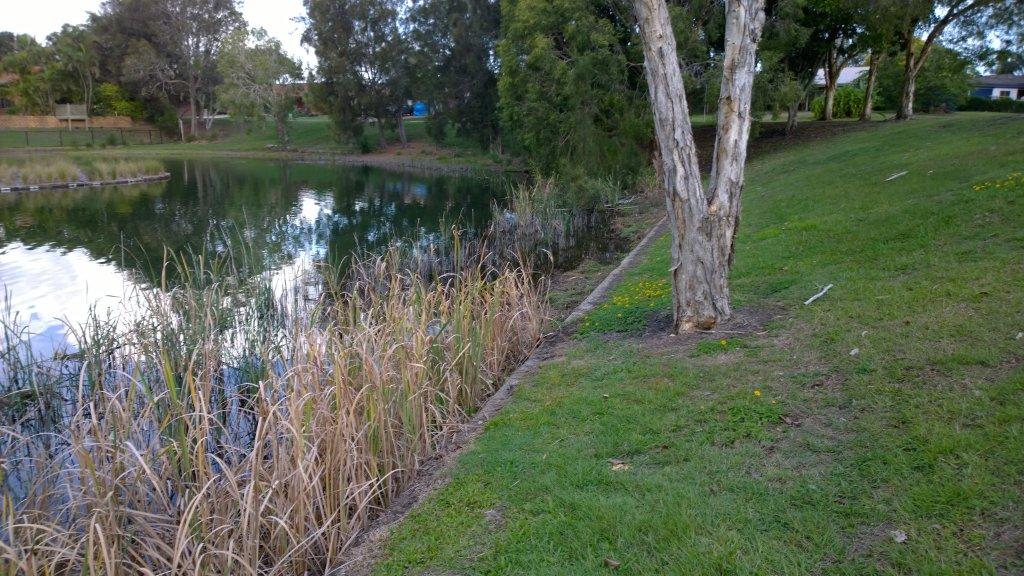 A large group of trees have grown over the lake retaining wall next to the lake storm water outlet. With numerous new shoots, maintaining this area would be difficult and weeds have taken over. Should these trees be removed and a replacement tree planted in the park in a more suitable location? 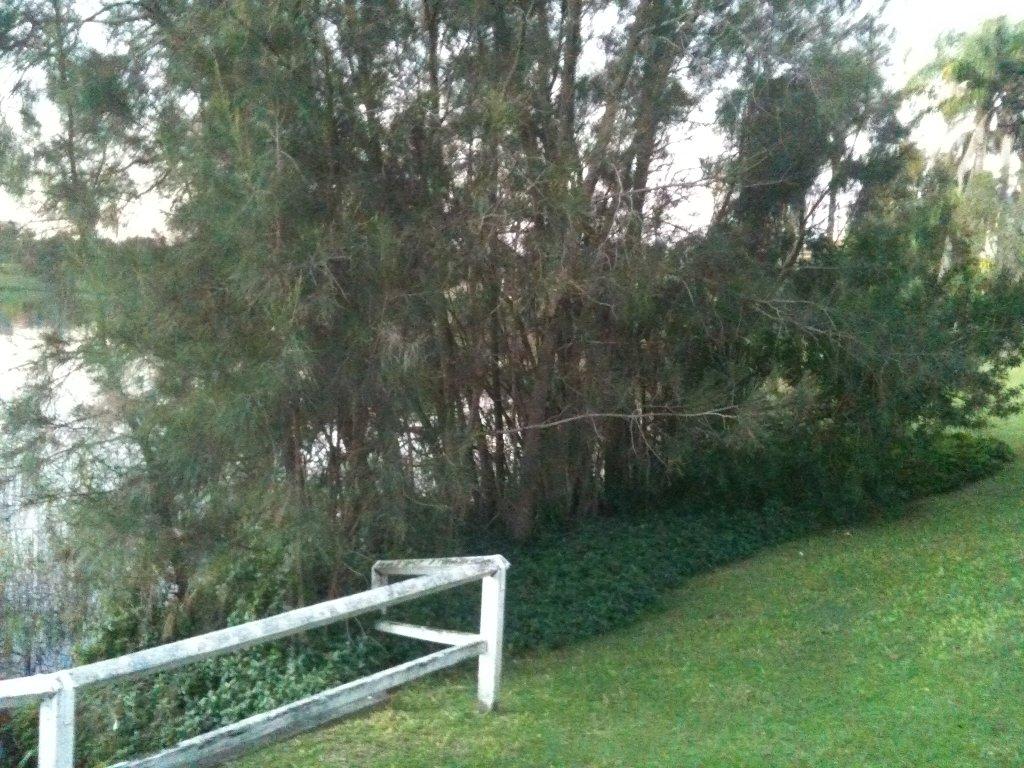 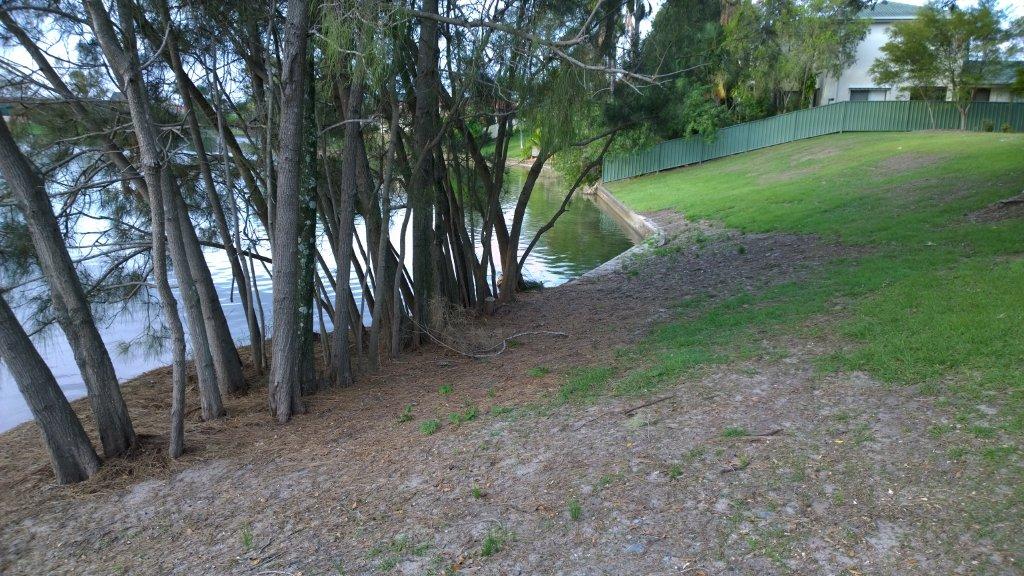 With large groups of people using Bell Air Park for extended periods, the question that has to be asked is where are they going to the toilet? The answer is in and around the lake parkland! While the advantages of toilet facilities is clear, residents backing onto the park have expressed concern over a toilet block attracting undesirables at night. A temporary solution is to request large groups to supply portable toilets while an acceptable solution is found.

Notice boards were part of the recommendations of the Management Plan. These contain useful information relating to the lake including fact sheets, behaviour reminders and  educational displays. Council have installed this sign in 2014 in Belle Air Park with display areas for catchment management use. 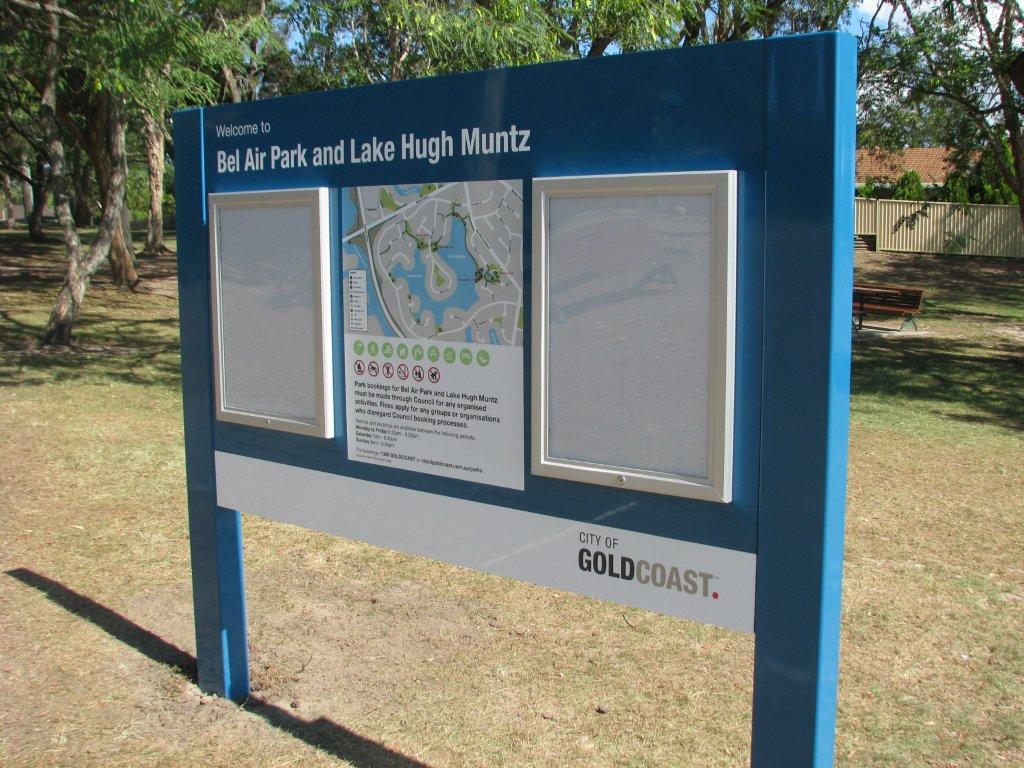